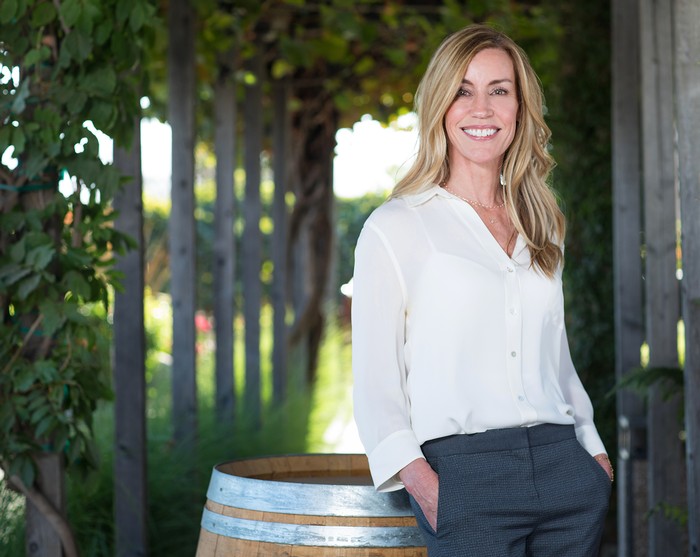 As we approach our 50th anniversary year, Heidi Scheid sat with John Mariani during a recent trip to New York. Here are a few excerpts from his interview as found on Forbes.com:

Back in the 1970s, with Napa Valley’s wines in their ascendancy and Sonoma soon to follow, Monterey was known more for grape growing than winemaking. One of the pioneers in the region was Al Scheid, who in 1972, was selling 100% of its grapes to wineries. In the decades to follow the estate began making its own wines. Al’s eldest son, Scott, left  Wall Street for Monterey in 1986. In 1988, Kurt Gollnick, who had previously farmed for Bien Nacido Vineyards, was brought on as General Manager of Vineyard Operations. A few years later, daughter Heidi, who had been working as a business valuation consultant also joined the business. While in New York, she sat down with me for an interview over dinner.

What did you do before joining the family winery? Did you avoid it until you did so?

I grew up in Costa Mesa, California and earned both BS and MBA degrees from University of Southern California. Early on, I fell in love with the restaurant business and waitressed my way through both high school and college, eventually managing the very first California Pizza Kitchen in Beverly Hills. Deciding that restaurant life in the ‘80s was not conducive to living a long life, I switched gears, earned my MBA with an emphasis in Finance and joined the valuation consulting practice at Ernst & Young. While on maternity leave from E&Y with my firstborn, I began visiting the Scheid offices to help the controller out with some projects, namely converting his manual green ledger spreadsheets to Lotus 1-2-3 spreadsheets. Yes, that’s how I spent my maternity leave. As I was preparing to return to E&Y, my father and brother approached me and asked me to stay, making me an offer I couldn’t refuse.

I didn’t really “avoid” the family winery, it just wasn’t on my radar screen. I earned my MBA and was working really hard, trying to make a name for myself in the male-dominated finance field. Before having a child, I thought that was my career path. But after having Siena, having more control over my life and working situation became important and the appeal of the family business and working in the wine industry revealed itself.

When did the winery decide to shift from selling grapes to making its own wine?

The original grape purchase contracts that our company was built upon were 30-year contracts. Diageo had indicated to us that they didn’t intend to renew them as they were planning on divesting themselves of the wine segment. So we were faced with a lot of grapes coming back into our portfolio with no home. We began talks with a number of wineries and many of them wanted to do contract wine arrangements versus contract grapes due to processing limitations at their own wineries. So in the early 2000s, we began making wine from our grapes at various custom crush facilities around the state and selling it under contract. We realized that this was going to be our path and the ability to make wine gave us a lot more flexibility and control in being a supplier to other wineries. So in 2005, we built Phase 1 of our state-of-the-art winery and in 2007 we doubled the size to its present capacity of about 30,000 tons.

While having the ability to supply both grapes and wine to other wineries gave us more flexibility, it still left us at the mercy of year-to-year market conditions and our fate was tied to the success of other companies’ brands. We decided it was time to put the third leg on the stool, so to speak, and we launched our branded goods division in 2011. The transition of being a supplier to others to producing brands under our own labels is still ongoing. We currently use about half of the grapes we grow for our own brands and sell the remainder to other wineries as either grapes or wine.

To read the rest of the interview go to Forbes: https://lnkd.in/gKjg2mHj